Hit enter to search or ESC to close

Join the fastest Submission-Only Tournament on the West Coast!

Upcoming BC BJJ and grappling tournaments for 2022

A Great Tournament Doesn’t Have To Be Expensive!

This Round Robin, Submission-Only tournament has been for years the most exciting tournament on the West Coast because it allows you to compete in multiple Martial Arts with many fights in each divisions. This gives you the maximum fight experience in one day and allows you to better yourself as a Martial Artist much faster without spending too much money. Don’t miss out on the chance, come and compete! 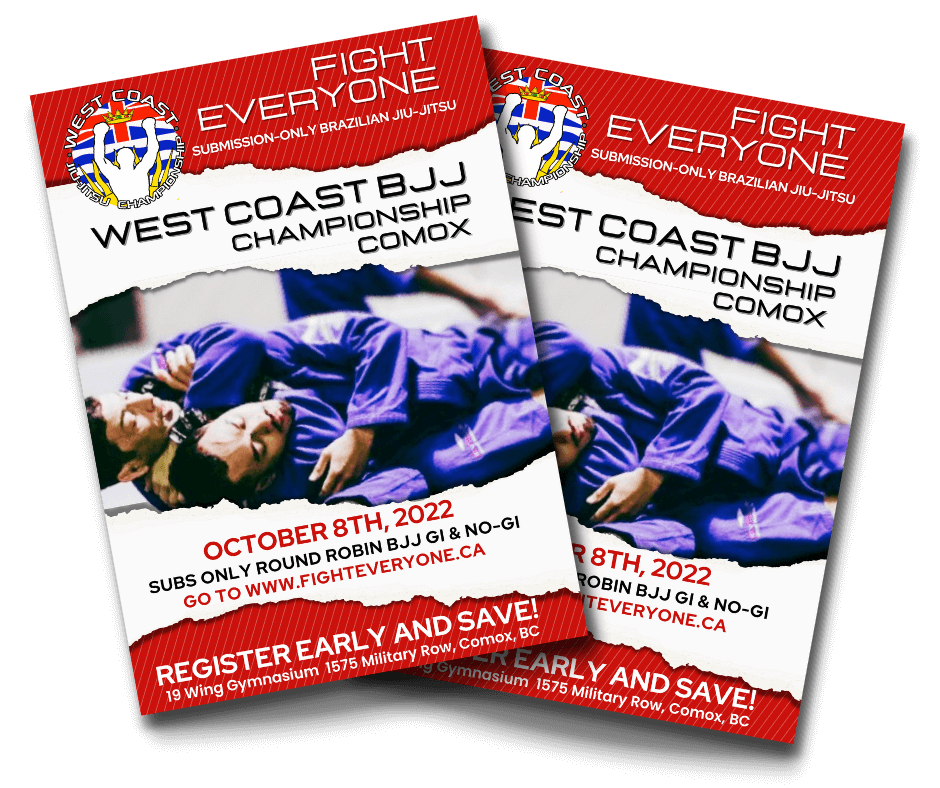 The West Coast Combat Championship British Columbia tour is coming to a city near you this year. This eliminates the need to travel far saving you time and money!

The Most Exciting Tournament

On The West Coast Is Now Live Online!

We are using now the same software as all large international tournaments allowing you to check on your next match and results on a live screen and your own smartphone. This means we are delivering even more exciting fights in faster order than ever before!

How many hours have you spend traveling on treacherous roads or waiting for ferry rides just to have one match, lose by advantage and then having to travel all the way back home?

Sure, it is great to compete in the large IBJJF events but wouldn’t it be great if there would be a better way to prepare rather than spending all the money and time traveling and registering over and over until you finally win some fights?

So what are you waiting for? Take advantage of this unique opportunity and register now!

Are You Ready To Compete?

(Minimum age to enter this division is 6 years old)

Spectator admission is $5 for age 12 and older and every competitor under the age of 16 is allowed one free admission for the accompanying adult.

Please read the rules below carefully. All competitors are expected to understand and respect the tournament regulations in case they miss the morning rules meeting.

If you do not understand a rule, call or email us or ask for clarification during the morning rules meeting the day of the competition.

IMPORTANT INFORMATION FOR ALL DIVISIONS

We expect all competitors to act like Martial Artists and compete in a sportsman-like fashion at all times. Always shake hands with your opponent before and after each fight.

If you lock in a submission do not apply it instantly trying to force a tap but look at the referee to make sure he recognizes the submission and give him a chance to step in to break off the fight even if your opponent does not tap.

All division weight-in without a uniform for simplicity. We reserve the right to merge divisions in order to give everyone the best experience. Because of this, it is useless to try to cut weight only to find yourself exhausted in the next higher division.

• Competitors must wear a BJJ uniform (in BJJ) or shorts and t-shirt/rashguard (Submission Grappling, Stand-Up Sparring, and No-Face Multiple Martial Arts) that is tight-fitting, clean, odor-free, and in good condition. (bare tops, muscle shirts, or inappropriate language or imagery is unacceptable). Mouthguards are recommended but hard groin protection is prohibited in all but the Kickboxing divisions.
• All competitors must wear MMA or Boxing Gloves provided by the tournament.
• It is mandatory to wear the following protective equipment for Stand-Up Sparring and
No-Face Multiple Martial Arts (provided by the competitor): tight-fitting headgear (test by shaking your head), mouth guard, groin protection (mandatory males only), Shin & Instep pads.

Control your submissions! Anytime a competitor is in danger of injury the referee will step in to prevent any harm to the fighter but we rely on your sense of fair play in order to prevent injuries and allow the opponent to continue to compete. Please remember, that these rules also protect you when you are caught in a submission.

Kids (15 and under) matches are stopped when one of the competitors is in a position to submit, i.e. an Armbar is fully locked in. Teen and adult competitors will be given a little more time to defend but this is 100% up to the discretion of the referee as his primary task is to prevent injury and keep all competitors safe.

If you lose your fight because the referee steps in please remember that he is there to protect you from injury and that you should not have ended up in a position where your opponent can lock in a submission in the first place.

We reserve the right to create all divisions based on sex, age, skill, and weight. Please remain in the competitor area once your divisions start because the fights happen quickly. If your name is called and you are not responding, we will move on to the next fight. After the fight ends we will call your name again. If you are still not responding your opponent will be awarded an automatic win. Tell the scorekeeper if you are not available to fight temporarily or altogether.

We are especially committed to supporting all female competitors and our goal is to get you as many fights in as fair as possible divisions.  We will create a division for females teens and adults whenever possible. If that is not possible, you will have the option to either get a full refund or to enter a mixed division with males of equal strength and skill and with all females in this division fighting for their own medal rank unless they win the mixed division.

—> 3 points are awarded for a win, 1 each for a tie, and 0 points for a loss. A Submission or disqualification automatically determines the winner of a match.
—> At the end of the Round-Robin the three fighters with the highest points are awarded the Gold, Silver, and Bronze medals accordingly.
—> For a 2 fighter draw in the medal ranks, the competitor who won the match between each other is the winner. If there is no decision by the end of regulation time, the match will go into overtime with a coin toss deciding who will get the back mount/seatbelt position first. The first opponent tries to submit while the second opponent tries to escape the rear mount while being timed. Next, the opponents reverse the roles, and the one opponent who escapes or submits the other one first wins.
—> For a 3+ fighter draw, the matches won/lost between the tied competitors are compared and if there is still a tie, a comparison is made score between the remaining tied competitors. If the score is still tied the 2 fighter draw solution listed above will be applied.

Expert– Any competitor with more than four years of experience and/ or purple, brown or black belt is in the Expert divisions

Please make sure to read the GENERAL NOTES above!

ILLEGAL TECHNIQUES (All Ages except where noted elsewhere)

Purple, Brown, Black Belts in the More than 4 years divisions

Registering for this tournament does not mean that you can injure the other competitors on purpose. All submissions need to be applied with control allowing your opponent to tap or the ref to stop the fight.

If you are not sure if a techniques is legal or if you cannot apply a submission with control, do not use it or you may find yourself personally liable for any resulting injuries!

In addition intermediate/advanced Divisions are allowed:

IMPORTANT NOTE: Registering for this tournament does not mean that you can injure your opponent on purpose.

If you are not sure if a techniques is legal or if you cannot apply a technique with control, do not use it or you may find yourself personally liable for any resulting injuries!

Intermediate and advanced Divisions are allowed:

IMPORTANT NOTE: Registering for this tournament does not mean that you can injure your opponent on purpose.

If you are not sure if a techniques is legal or if you cannot apply a technique with control, do not use it or you may be found personally liable for any resulting injuries!